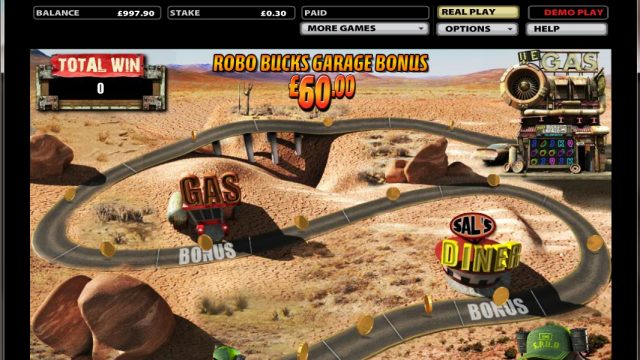 Robo Buck’s Garage is an incredibly popular slot game that was initially developed for the OpenBet platform and deployed as a Flash game for Sky Vegas and has also been deployed at many more online casinos such as William Hill, Ladbrokes and many more.

Join S.P.U.D. for some fun with his wondrous contraptions. Cash prizes can be won on any of the 30 win lines, or from the Prize Wheel feature, where you control the spin of S.P.U.D.’s giant neon wheel of fortune. A number of bonuses can be claimed here including prize spins, multipliers, and respective entries into the Drive In or Route 66 feature rounds.