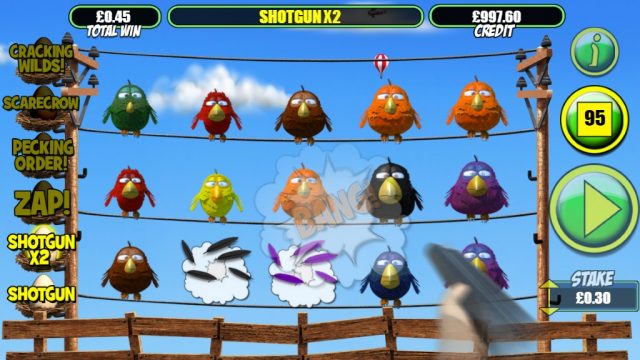 Birdz is another incredibly popular slot game that was initially developed for the OpenBet platform and deployed as a HTML5 and Flash game for Ladbrokes. After an initial exclusivity period of 6 months with Ladbrokes and due to it’s popularity the HTML5 and Flash games were then redeveloped and deployed onto Sky Vegas casino and we hope to deploy to many more casinos in the future.

This was the first mobile game that we as company (Games Warehouse) and myself personally deployed into the casino market. It was received very well on both Ladbrokes and Sky Vegas, taking more than one million pounds in it’s first week on both.

Birdz is a cascading 5-reels slot game. Instead of spinning reels, different coloured birds fly into view, and any winning combinations are eliminated after paying out. The remaining birds then drop down, and all empty spaces are replenished from above. With a successful winning spin, the feature trail begins and increases as long as wins are consecutively found. The aim is to reach the highest feature preached at the top of the tree for soaring rewards. The game has six different bonus trail features that give player another chance of receiving a win and climbing higher up the trail and a Bird Blitz feature where the Birdz are reseeded continually until a win is eventually found!