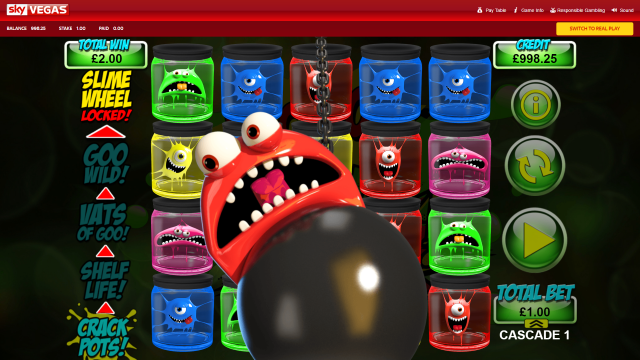 Jackpots Of Goo is another incredibly popular slot game that was initially developed for the OpenBet platform and deployed as a HTML5 game for mobile devices and desktop users for Sky Vegas casino. After an initial exclusivity period of 6 months with Sky Vegas we hope to deploy to many more casinos in the future. It was received very well on Sky Vegas taking nearly three million pounds in it’s first week.

Jackpots of Goo is a chain reactor game with a five stage trail consisting of four Reactor Grid modifiers and a Multiplier Wheel. Instead of spinning reels, different coloured pots of Goo drop down on a 4 x 5 grid and 5 or more adjacent jars of the same colour (or combined with one or more Wild Goo pots) create a win. The rest of the pots cascade down and the whole process repeats until there are no more wins.

Reaching the top of the trail unlocks the Slime Wheel which grants one spin of a multiplier wheel with a chance to win x2, x3, x5 or x10 your winnings from the Reactor cascade!